In many test scenarios, receiving color information as a point in a standard color space is not sufficient. Instead, detailed spectral information is required. While a measured color value only reflects the overall impression of the tested object, a measured spectrum contains information about the spectral structure of the light stimulus recorded.

The measurement of a spectrum is imperative for a large number of application fields. Light sources, such as when testing LEDs, are checked for dimensional accuracy in this way. Compliance with the specification can only be ensured by looking closely at the wavelengths and intensity at which an LED shines.

Surface refinements such as paintwork in many cases also have to be checked spectrally: While two objects may still look identical in the light of the fluorescent tubes of a production hall, they suddenly appear in different shades under sunlight - a phenomenon that is known as metamerism. The underlying cause lies in the different spectral structures of the color impressions of the two objects. While the reflections of the individual wavelength ranges in the light of the fluorescent tubes add up to the same sum, they reflect the sunlight in different ways - the color impression deviates from the target. In order to be able to prevent this problem in production, the spectral structure of the reflected light must be checked, not just the overall impression.

From the color impression itself, statements about the spectral structure of a light source can only be made to a very limited extent. The following graphic shows the reason, using the example of two common light sources: the sun and a fluorescent tube. The range shown is only a small section of the complete sun spectrum, the emission of our star far exceeds the range of visible light in both directions. The line shown corresponds to a measurement on the surface of the earth. Some frequency ranges are already reflected or absorbed in the atmosphere, so that far less arrives, especially in the ultraviolet range, than would be measurable at a height of 100 km. The emissions of the sun measured on the earth's surface are almost equally intense in the entire range visible to humans. This is probably why our eyes have evolved in such a way that we perceive just this frequency range as light.

The second spectrum shows the emissions of a standard fluorescent tube. As you can see, a fluorescent tube only emits in a very narrow frequency band, but with high intensity. Outside of the two peaks at 550nm and 610nm, it practically does not light up at all. 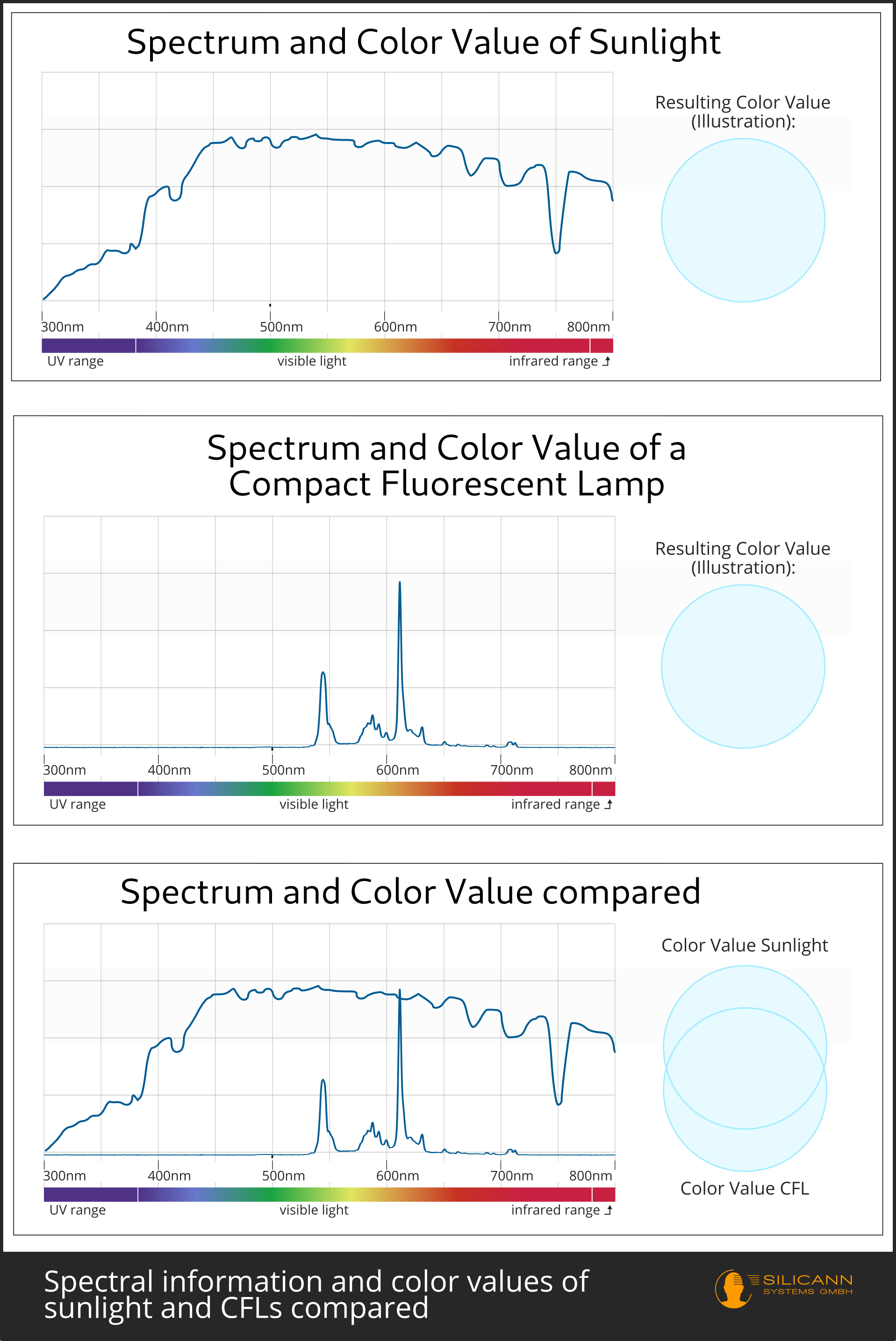 Us humans can also find our way under the light of a fluorescent tube. But there are many areas in which this difference is of great importance.

For example, plants do not only rely on light as an energy source for photosynthetic processes, but also rely on the full spectrum for optimal growth. Radiation in the ultraviolet and infrared range regulates the hormonal balance of the plant and in this way has an effect on its growth behavior.

If you want to select the one lightsource out of all the available options that is optimally suited for illuminating plants, then a color value does not help. Instead, the spectra of the light sources must be compared with that of the sun filtered through the atmosphere.

How does a spectrometer work?

A spectrometer provides information about the intensities of individual wavelength ranges. The light stimulus to be measured, however, consists of many superimposed light beams, which may also be reflected in a wide variety of directions. These diverse light beams first have to be parallelized. A lens is used for this, illustrated in the picture below.

After passing through the lens, the light rays are now parallel to each other, but individual rays of different wavelengths are still superimposed. Therefore, the beam is now passed through an optical grating or diffraction grating. An optical grating can actually be thought of as a grating, but the dimensions are extremely small: the width of the slots is usually only a few µm.

However, the resulting beam still has a two-dimensional cross section. Because the sensor lines waiting at the end are actually lines, i.e. more linear, a second lens must now concentrate the circular beam in such a way that as much of the light as possible falls on the sensor.

The sensor consists of a series of individual cells. When a light beam fanned out by wavelength hits the sensor, only certain wavelengths reach the individual cells. The cells themselves now simply count the incoming photons, and an electrical signal is delivered at the output of the sensor line that contains the measured intensity per cell.

In the classic setup of a spectrometer, there is only a single photodiode instead of this row of diodes. This diode reacts to light of different wavelengths (approximately) equally strong, which means the diode only tells us the amount of incoming photons, not their wavelengths. In a design with a diode array, only a certain wavelength range hits a single diode of that array automatically. If there is only a single photodiode, then the spectrum must be filtered in a previous step so that only a particular, narrow wavelength range hits the diode at any point in time. In the classic design, this task is performed by a movable prism in conjunction with a slit: 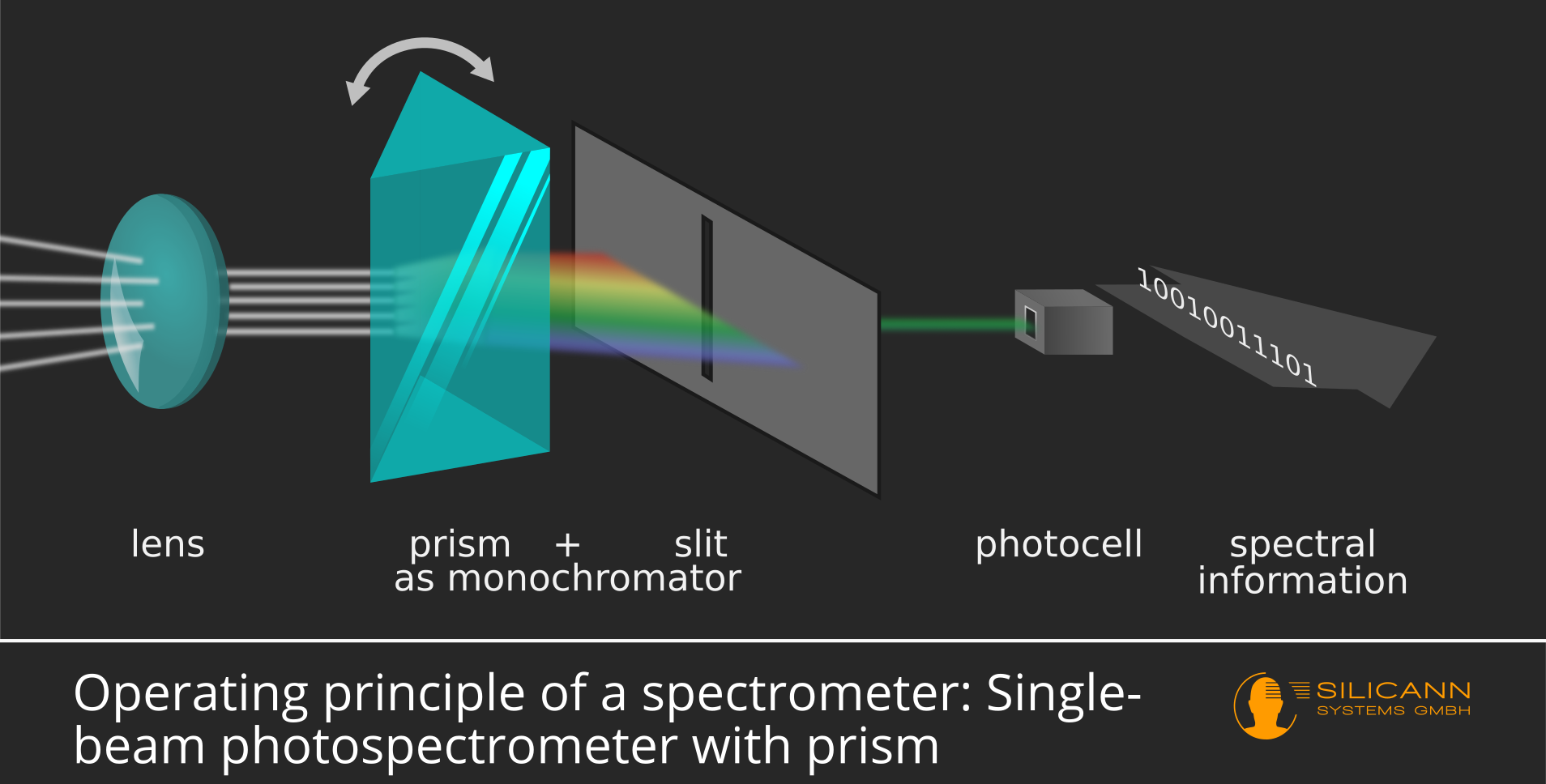 This design has the advantage that very high resolutions can be achieved in this way, i.e. the measured spectrum can be divided into many small subsets. On the other hand, diode array spectrometers can achieve significantly higher measuring speeds and are less susceptible to vibrations because they do not contain any moving components.