Rainbows have arguably been fascinating mankind vor millenia. They have been interwoven into religious myths of many cultural spheres. Especially our inability to draw closer to a rainbow has inspired the fantasy of many generations. Tales of pots filled with gold or other treasure are known in many different countries.

But how does a rainbow really come into being?

For creating a rainbow it takes, unsurprisingly, a wall of rain and a light source. The latter role usually gets played by the sun, but there also are e.g. the much less common moon rainbows. And we need human eyes.

The sun (or any other light source) has to be behind the back of a person, and the rain infront of her. It is important that the sun isn't too high in the sky, which means in the midmornings and afternoons the chances of seeing a beautiful rainbow are much higher. Depending on your position on our planet it often is particularly difficult to catch a rainbow during the summer as the sun is at its highest path through the sky.

In addition to that a rainbow is only possible because the "white" light of the sun actually consists of a multitude of rays at different wavelengths. A part of these wavelengths our eyes can see as color. But the sun doesn't just emit visible light, which is just a particular band of electromagnetic radiation, but also other wavelengths that our eyes cannot capture, for example the short-wave ultraviolet radiation and the long-wave infrared radiation. The sum of the wavelengths that are visible to us create the impression of white light. But those individual waves are not linked together inseparably - they simply are detected by our eyes at the same time.

And this is where the raindrops come into the picture. At and within these drops two processes occure, reflection and refraction, without whose we couldn't see rainbows. Let's first look at the process of reflection. 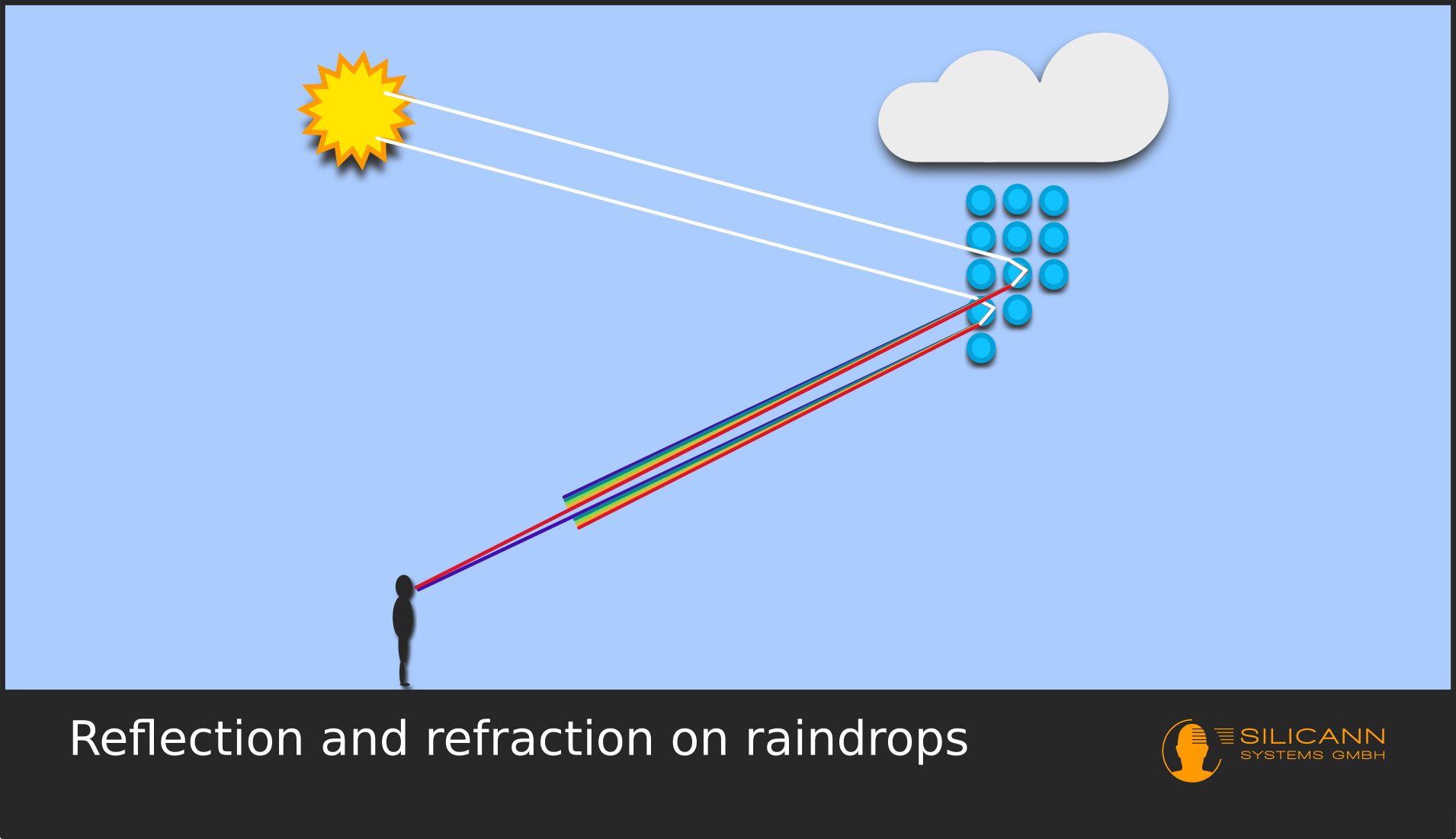 Why do these rays sometimes get reflected inside the raindrops and sometimes not? When light rays move through materials of different density (in this case air and water), the ray gets deflected at the moment of transition from one material to the other. This process is called refraction of light.

Because of this refraction, the light ray continues its journey in a slightly different direction as it followed before the transition. And when the ray re-emerges from the backside of the raindrop, the same thing happens: The path of the light ray changes.

Let's now imagine a changed exit angle of the sun ray, so that the new direction of the ray gets ever closer to the edge of air and water. If the angle reaches a particular size, the exiting ray would exactly follow along the air-water edge. If the angle is increased just a little more, then we have the situation that the ray would exit the raindrop. Instead it gets reflected on the inside of the drop.

Of course these effects don't only occur with a single raindrop but with all the raindrops falling.

So far so good, but with this explanation alone a rainbow wouldn't be a rainbow. If this would be all there is to it, we would just see a lighter area that would stand out from its environment. An explanation for the formation of the rainbow colors is still missing.

Color is created in the brain

As mentioned, white sunlight actually is a composition of many rays with different wavelengths. Our eyes, or rather the three types of cones on our retina, are sensible for different bands of visible light. The colors we see don't actually exist, they are constructs of our brain. If the L cones, sensibe for the longwave range, is stimulated by incoming radiation, then the information "red" gets transmitted to our consciousness. 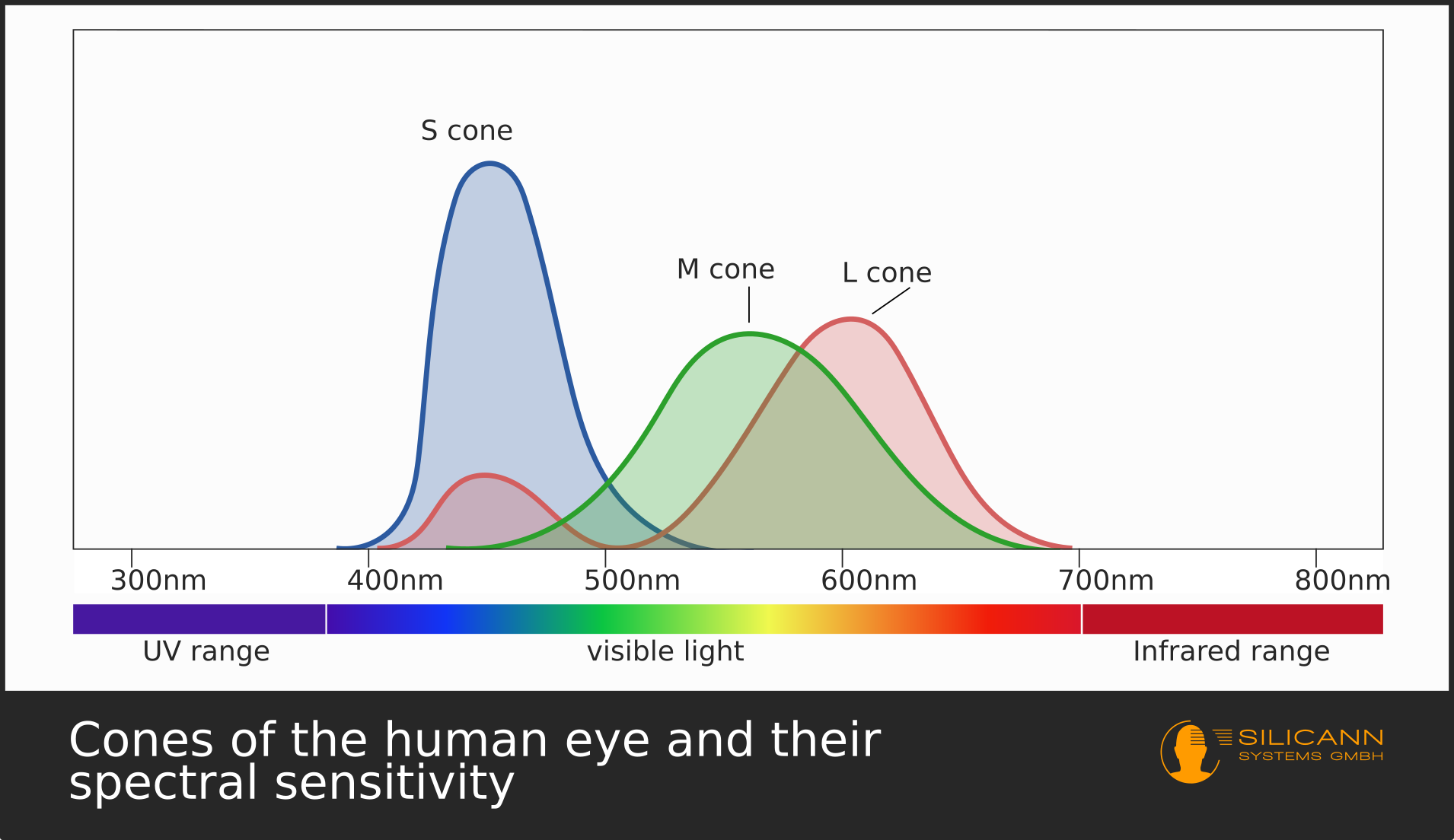 In the graphic above one can see that we only have the three types of receptors, and they more or less align with the blue, green and red color ranges. But we only have to look around right now to realize that we can discern many more than these three colors. That's because the signals of these three receptors don't get processed directly, but are interconnected with each other. That way, e.g. the signal difference of M cone (green range) and L cone (red range) returns the color impression of yellow. 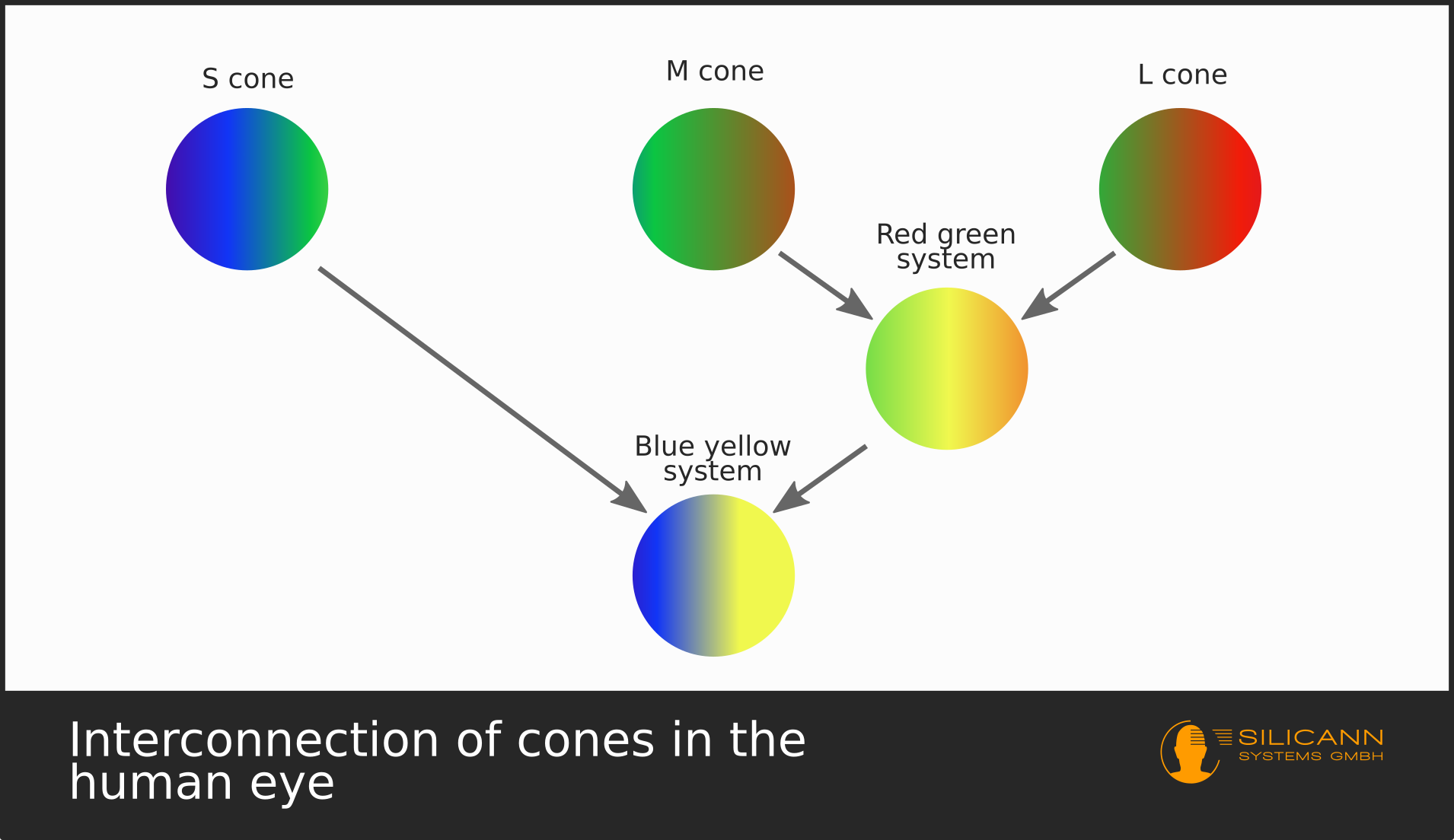 These processes get explained in more detail in our article on metamerism.

Rainbow colors and their wavelengths

The wavelengths of visible light spans from about 380nm in the violet range up to about 700nm in the deep red range. Inside this spectrum lies an effectively infinite amount of different color impressions. To our consciousness some wavelengths inside this spectral range clearly stand out as distinct colors. These are the rainbow colors. Their respective color impressions all more or less match a specific wavelength. One can't pinpoint them exactly, though, because the visual systems of us humans all differ slightly.

The precise wavelengths of the rainbow colors are listed in the following table:

How many colors does a rainbow have?

These days we can only guess why the fine differentiation of the blue range was so important to Newton. One explanation is the numerological importance of the number seven. This is aggravated by the fact that at the time it was believed that only seven planets rotate around the sun.

On the other hand, the color resp. the material indigo was both very valuable and of symbolic importance, so perhaps Newtons eyes were trained enough to clearly differentiate indigo as a distinct color.

A third possibility: Perhaps Newton's eyes were unusually sensitive in the high frequency range, so that he could see wavelengths which most people would have ascribed to the invisble UV range. Some people really can see light frequencies beyond the usual visible range from 380nm to 700nm, allowing them to see an additional 20nm or even more. The eyes of these people don't have additional cone types, which means that they don't see additional colors, but perceive the extremely shortwave light as violet and the extremely longwave light as deep red.

Light refraction is depending on the wavelength

Back to the raindrops. Because water and air have differing density, light rays will get refracted on the edges of material transitions. The refraction angle is dependent on the specific mix of materials. In physics classes we all have learned that in the case of water-air transition the refraction index is about 1.33. But that is only half the truth. The refraction index is dependent on the temperature, among other factors - the value of 1.33 is only correct for a environmental temperature of 20°C.

Even more important for the formation of a rainbow is the fact that the refraction index is also dependent on the wavelength. While the difference in wavelengths from deep blue to deep red, the poles of visible light, only amounts to about 1%, this deviation is enough to fan out the spectrum of sunlight and thus create the typical rainbow color effect.

So this part of the riddle is solved. We only have to elucidate one last mystery.

Why is the rainbow round?

To simplify things, we have thus far sketched the raindrops as circles. In reality, though, they are of course not two-dimensional, but more or less spherical. And that has consequences on the directions the rays will get reflected to. As the surface is curved, the incoming rays get reflected to various directions when reaching the inner side of the raindrop's surface. A part of those will reach our eyes, but most of those rays won't be perceived by us.

From the vantage point of an observing person, this would result in a light cone, the circular base of which will lie on the rain front. The tip of the cone will lie in the eye of the viewer. Along the axis from the center of the circle to the tip, but much further along, we will find the sun.

As we lack wings, we most often stand on the ground and thus can only see half of this circle - which results in the wellknown form of a rainbow. 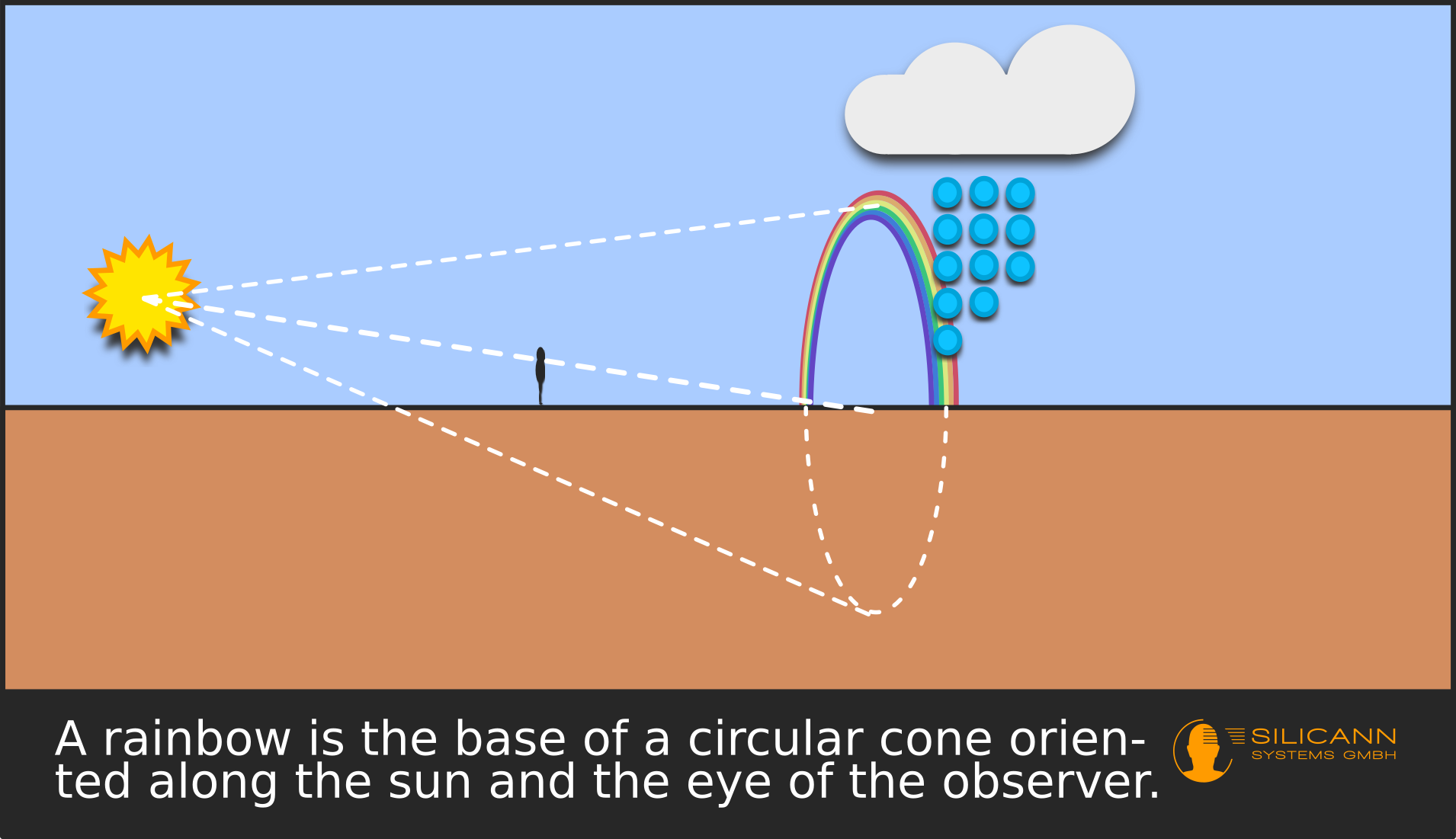 So those who frequently fly would principally have a chance of observing a complete rainbow circle. For that to happen, the sun, the plane with the observing person and the rain front would all have to be aligned along the same axis.

Now we have exposed all the secrets behind a rainbow and its colors. This makes them less mysterious - but they are still as beautiful as ever.