Fluorescence is one of those physical phenomena which we often experience in the real world without really noticing them. Perhaps you observed those shiny white t-shirts or sometimes even teeth when in a club illuminated by black light. Or perhaps you stumbled upon a reference to so-called optical brightening agents that get mixed into many detergents - and whose use is sometimes criticized because of health and ecological considerations. But at least as often you'll hold a fluorescent material in your hand without realizing it, for example when unwrapping a newly bought white shirt or bright white writing paper. All these examples have one thing in common: they were treated with fluorescent substances.

Fluorescence describes the phenomenon that some materials, when illuminated with light of a certain wavelength, will send back a potion of that light - though not at the same wavelength, but rather at a longer one. In contrast to phosphorescence there is no afterglow for longer than a few nanoseconds.

Let's stick to the example of black light in a club. Black light is another term of an ultraviolet light source. UV radiation, just like visible light or infrared radiation, all are examples of electromagnetic radiation. Those three types of radiation only differ in the spectrum of wavelengths the terms cover. 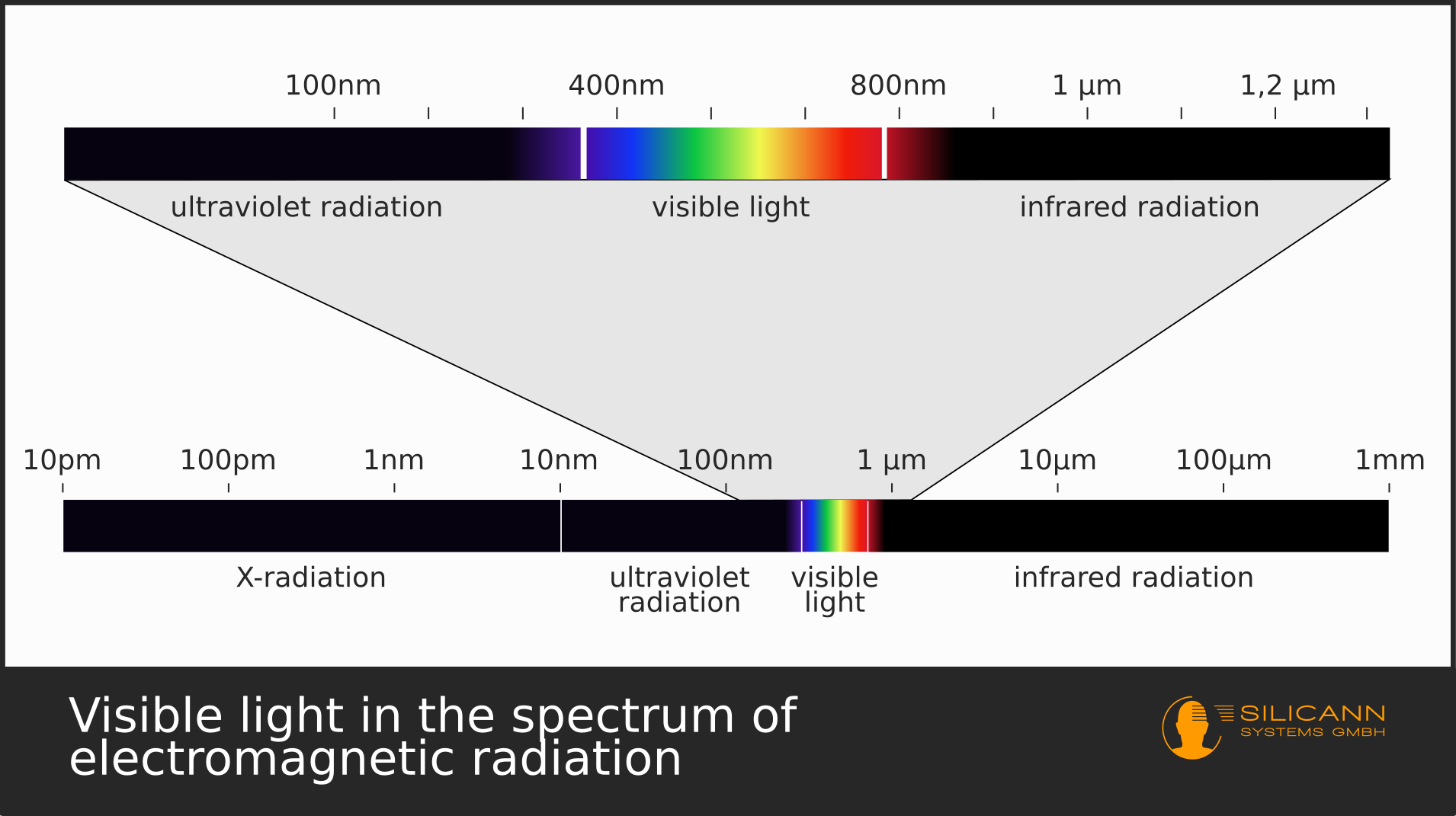 The UV spectrum covers a quite wide range of wavelengths. The neighbour on the long-wave end of the spectrum is the deep blue of the visible light. Radiation of UV light sources in a club now hits the shirts of people in the club. These shirts in turn were either already treated with optical brighteners during the manufacturing process or the brighteners were in a washing agent that was used when the shirts were cleaned the last time.

Optical brighteners belong to the fluorescent dyes. These are materials that reflect back incoming UV radiation as radiation on the shortwave (which means blue) end of the visible light spectrum. This light blue cast gets combined with the light yellowish-brown of discolored textiles and creates the impression of pure white in our eyes. This works not only in the club, as the sun light doesn't just consist of visible light, but also contains UV radiation, among others. 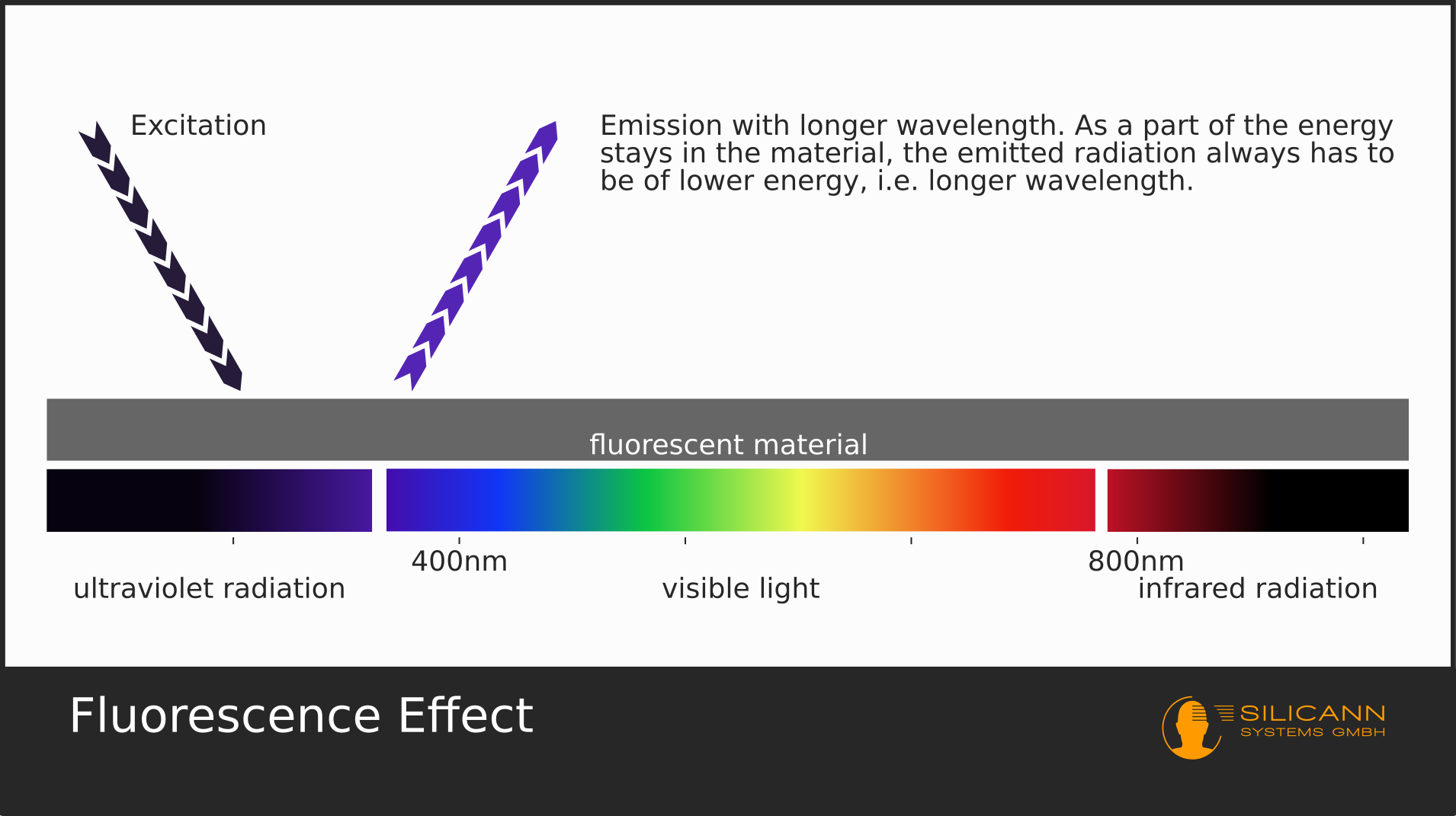 Nowadays optical brightening agents, especially in detergents, are not exactly uncontroversial. For a start not everything will stick on the textile during while washing. A certain amount will directly land in the wastewater, which means fluorescent dyes can accumulate in the waters. This is problematic because many members of this group of substances has come under suspicion to act like artificial hormones, and thus can influence the metabolic processes of humans and animals.

Fluorescence, like phosphorescence, belongs to the processes called luminescence or cold light. The special thing about the chemical or biological processes leading to luminescence is the fact that substances will emit light in the human-visible spectrum while not being glowing hot. In contrast to that most other sources of visible light are glowing hot bodies. Our sun, other stars, a classic lightbulb or halogen lamp, a candle or the ember of a campfire: for all these light sources the heat is the reason for the emitted light. With these hot bodies the heat causes the heat radiation of the object to shift away from infrared the infrared spectrum into the wavelengths of visible light, which makes it visible for our eyes.

There are multiple applications of the fluorescence phenomenon besides black light in clubs. For example, Silicann Systems has implemented multiple projects in the field of germ detection. In these cases the fluorescent substances are microorganisms. If the tissue sample of a patient shall be tested for the presence of certain germs, then this inspection can be done using a spectrometer. For this to work the germs in question have to be examined for their optical properties. Some classes of pathogens contain fluorescent components. Once the important wavelengths for fluorescence excitation have been researched, real-world inspections of samples are a matter of mere seconds: The sample of a patient gets irradiated with light of the previously found, narrow range of excitation wavelengths. If the sample now emits back light of a certain wavelength, this material is contaminated with the microorganisms in question. If there is no reflection in the band in question, it can be assumed that the inspected sample doesn't contain the pathogens.

Until now samples have been inspected by applying them on nutrient solutions and letting these breed for a few hours under conditions that are ideal for the germs in question. Afterwards the solution is inspected manually, using a microscope, to find out wheter germ cultures developed in the petri dish. This manual process can take up to 24 hours and sometimes even longer. A spectrometrical measurement employing the fluorescence effect can deliver comparable results in seconds or minutes.

If substances fluoresce by itself when illuminated by the correct light source, this is called autofluorescence. If we want to prove presence of substances which don't have this property, then one option would be the application of so-called fluorescence markers. Fluorescence markers are materials that bind to the substance we actually want to examine. Because the optical properties of the fluorescent markers are well-known, this is a way to indirectly make the actual substance optically detectable.

Perhaps you know this from crime shows: A crime scene gets sprayed on with an unidentified liquid. Afterwards the scene gets illuminated with a UV light source, revealing details that weren't visible before. This is one application of fluorescence markers. Some body fluids in turn are autofluorescent and thus don't need these markers. As the excitation and emission wavelengths of many chemicals are well-researched, special light sources or filters are available to directly target specific chemicals.

The medical sector uses fluorescence markes for many additional application. For example, they are used to highlight specific compontents inside cells, which enables a more differentiated analysis. There even are special markers for different kinds of tumors. Often these substances don't fluoresce in the range of visible light, though, which means the laboratories have to employ spectrometers for UV or IR to evaluate the results.

Another important field of application are proofs of purity or origin of chemicals used to produce pharmaceuticals like drugs or other sensible products. Sometimes these components are autofluorescent and can be differentiated by special illumination alone. In other cases the manufacturer directly adds special makers to the product to enable proofs of authenticity at further stages of the production chain. These inspections usually occur directly at the manufacturing line: Inline spectrometers monitor the substances passing through during the running production process.

Even presumed low tech industries like the agricultural sector nowadays employ fluorescence effects. Chlorophyll, which is present in almost all plants, is an autofluorescent substance. With plant species and its usual chlorophyll content as known values, one can use a spectrometer to indirectly measure the level of soil fertilization by measuring chlorophyll in the leaves: Is the detected amount of chlorophyll lower than expected, then the plant lacks sufficient amounts of nutrients to produce enough of the molecules. This technology is already available, helping to prevent overfertilization and thus enabling a more sustainable use of the soil and its environment.

With further prevalence of spectrometers we'll certainly see even more everyday use cases of the formerly esoteric phenomenon of fluorescence.